Zachariah Bay has been located and taken into custody by the Fort Lauderdale Police Department.

On 12/09/2015 at approximately 12pm, Bay robbed at gun point, the Family Dollar store located at 10215 Beach Drive in Calabash and fled the store with cash.  Within approximately one hour, detectives with the Brunswick County Sheriff’s Office identified the suspect as the 21 year old Bay.

The investigation revealed that Bay was being transported in a vehicle driven by the suspect’s brother, 20  year old Jacob Denzil Conner Bay , which was a black, Ford Sport Trac reported stolen out of South Carolina.  Further investigation led detectives to believe the pair may be traveling to the Florida area.  BCSO then contacted authorities in the area.

During the evening hours of 12/10, the Florida Highway Patrol contacted BCSO detectives and advised they had been involved in a chase with the suspects, reaching speeds in excess of 100mph, along Highway 95.  The chase ended in a vehicle crash and the suspects fled the vehicle and ran.  Sometime later, the Indian River Sheriff’s Office contacted BCSO detectives and advised that the pair had stolen a second vehicle about two miles from the crash.  Authorities with the Ft. Lauderdale Police Department searched the area for the vehicle, a gray GMC pick-up.  The vehicle was spotted parked near a hotel off of Highway 84.  When the suspects saw law enforcement in the area, they fled the vehicle and ran into the nearby hotel.  The area was secured and a perimeter was set up.  The suspects then fled the hotel on foot.  Jacob Bay was found at a nearby shopping center where he was apprehended by the Ft. Lauderdale PD, after providing a fictitious name and other information.  The elder Bay fled to an occupied residence where he broke in and was apprehended a short time later by Ft. Lauderdale PD with the help of a K9.

No one was injured during the incident with the exception of Zachariah Bay who suffered minor injuries inflicted by the K9.

Both Bays are in the custody of the Broward County Sheriff’s Office detention facility.

Brunswick County Sheriff John Ingram would like to express his thanks to the US Marshals service, the Horry County Sheriff’s Office, the Florida Highway Patrol, Indian River Sheriff’s Office and to the Ft. Lauderdale Police Department for all of their assistance in apprehending these suspects.  Both Bays will face charges in Florida before being brought to Brunswick County where the senior bay will face charges for armed robbery.

Mug shot and bond information is not immediately available.

Detectives with the Brunswick County Sheriff’s Office have identified the man responsible for robbing the Calabash Family Dollar Store on Beach Drive.

Zachariah Gerald Bay, 21 of Temple Street in Conway, is wanted by the Brunswick County Sheriff’s Office for robbery with a dangerous weapon.

Bay is thought to be in the NC or SC area and possibly driving a white station wagon.

Bay is considered armed and dangerous.

Detectives with the Brunswick County Sheriff’s Office are asking for the community’s assistance in identifying a man who robbed a store in Calabash.

At approximately 12 noon this afternoon, a white male entered the Family Dollar Store located at 10215 Beach Drive in Calabash, brandished a gun and proceeded to rob the store of cash. He then left the store on foot. ​

​ A clerk and a patron in the store at the time were unharmed. ​

​ The suspect is described as a white male, 6’0″ tall wearing a dark hooded sweatshirt and jeans and having a tattoo or mole under his right eye. ​ 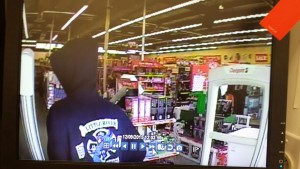 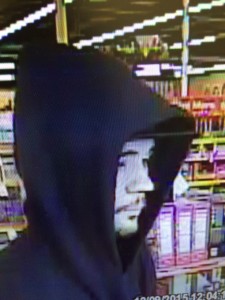 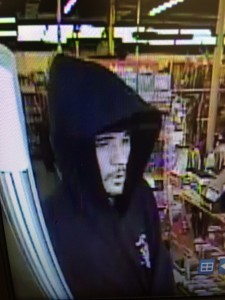