The Brunswick County Detention Center was constructed in 2005 and all operations officially moved into the facility in June of 2005 from the old 75 bed facility. At that stage, it was a 196 bed facility. As the population of Brunswick County continued to grow, the facility quickly became over crowded and in 2008 the second phase of the Detention Center was constructed, increasing the total number of beds to 444.

The Detention Center is modular in design, which will allow the facility to be further expanded as the population of Brunswick County continues to grow. It consists of several administration offices, a public lobby, separate Booking and Releasing areas, a Medical Station, and thirteen Inmate Housing Blocks.

The Brunswick County Detention Center serves our community and citizens by providing safe, secure and humane detention of individuals in our custody while preparing them for a successful return to the community. The Detention Center is operated by properly trained personnel using the core principles of integrity, loyalty and service to provide a secure, safe, efficient, progressive, and humane facility for both staff and inmates. 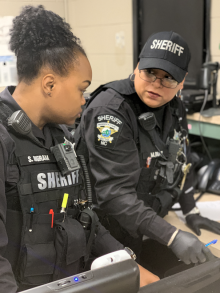 Integrity – Integrity is central to everything we do and key to maintaining the trust of our citizens, colleagues, and law enforcement partners. We are honest and truthful with the citizens and visitors we serve. We model positive behavior and observe the highest moral and ethical principles.

Service – The Brunswick County Sheriff’s Office exists to serve and protect our citizens and community. We strive each day to be selfless in our devotion to duty as law enforcement officers. We carry out our crucial mission with professionalism, respect for others, discipline and self-control.

Courage – We will carry out our duty to serve and protect the citizens of Brunswick County with the utmost physical and moral courage despite personal risks and with the firm commitment to do what is right and just. We take responsibility for our decisions and actions and courageously consider new ideas to change and improve our organization where change and improvement are needed.