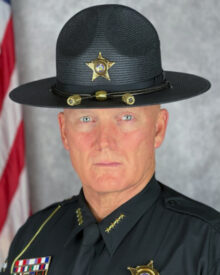 Sheriff Ingram joined the Brunswick County Sheriff’s Office as a Patrol Deputy under Sheriff John Carr Davis and worked his way through the ranks of the Warrant, Detective and Narcotics Divisions. He was promoted to the rank of Lieutenant of the Narcotics Division in 1999, a position he held along with the title of SWAT Team Commander for five years. In 2004, Sheriff Ingram took the position of Lieutenant over the Narcotics and SWAT divisions with the Columbus County Sheriff’s Office, before being promoted to Chief Deputy in 2006. On April 7, 2008, Sheriff Ingram was hired as Chief Deputy of the Brunswick County Sheriff’s Office. On May 19, 2008, he was appointed Sheriff and has been re-elected to three additional terms. He will not face any opposition in the 2022 election.

His responsibilities are complex and includes the management of a $47,622,249 budget and oversight of more than 330 employees and 300 volunteers. Additional duties include overseeing the 911 Communications Center and a 477-bed detention facility operating as a multifunctional law enforcement agency in one of the largest and fastest growing counties in NC.

During Sheriff Ingram’s tenure, numerous innovative programs have been implemented. The Sheriff’s Citizens’ Academy was created to educate the citizens of Brunswick County about the capabilities and operational responsibilities of the agency.

This program ultimately led to the creation of the Sheriff’s Volunteer Program in 2010.

The Volunteer Program has grown to support nearly every aspect of the Sheriff’s Office and has been recognized internationally for its proactive approach. With over 300 active members, this service has saved Brunswick County taxpayers millions of dollars. The Anchor Initiative was created to address the increasing addiction crisis by connecting people suffering from addiction with available treatment services. Since inception and as of 2019, the Anchor Initiative has served over 487 people funded solely by donations. Most recently in July 2018, the Brunswick County Sheriff’s Office was recognized as a nationally accredited agency by CALEA, the sixth Sheriff’s Office in the state to achieve this award.

Sheriff Ingram is a graduate of the 2009 National Sheriff’s Institute and the 2010 North Carolina Sheriff’s Leadership Institute. He is also a graduate of the Drug Unit Commanders Academy, which is conducted by the DEA. He holds an Advanced Law Enforcement Certificate and has a degree in Criminal Justice. Other notable accomplishments include receiving the Law Enforcement Award of Excellence by Mothers Against Drunk Driving in 2012 and awarded the Dogwood Award by NC Attorney General Josh Stein in 2019.

In 2013, Sheriff Ingram was elected to serve on the Board of Directors with the National Sheriff’s Association. He is also a member of the North Carolina Sheriff’s Association and has served on numerous committees to include chairing the Activities Committee and host Sheriff of the Annual Conference. Sheriff Ingram served as President of the NCSA from 2019-2020, Chairman from 2020-2021 and is currently serving on the NCSA Executive Committee and will continue to serve on the North Carolina Sheriff’s Training and Standards Commission which governs certifications of all deputies, detention officers and telecommunicators. From 2020-2021, Sheriff Ingram was appointed to serve on Governor Cooper’s North Carolina Task Force for Racial Equity in Criminal Justice. This task force was developed to assist with the implementation of solutions that will eliminate disparate outcomes in the criminal justice system to communities of color. In March 2021, Sheriff Ingram was appointed by Chief Justice Paul Newby as the Sheriff member of the Chief Justice’s Commission on Fairness and Equity. This commission was created by an order of the Supreme Court of NC in October 2020 and is charged with making recommendations “to reduce and ultimately disparate treatment, impact and outcomes in the North Carolina judicial system.”

Ten years ago, the Brunswick Sheriff’s Charitable Foundation was established and has been dedicated to actively serve the people of Brunswick County by building permanent charitable capital to support programs and provide services that enhance the quality of life for all its citizens. He is also involved in organizations including the Chamber of Commerce and Rotary, just to name a few, and he always supports numerous fundraising efforts for the community and local schools.

Sheriff Ingram and his family currently reside in Bolivia, where they enjoy spending time outdoors. Sheriff Ingram is honored to serve the great citizens of beautiful Brunswick County, one of the safest counties in North Carolina.

Sheriff Ingram is assisted by an Executive Assistant.