The Brunswick County Detention Center recognizes the importance of an inmate’s ability to communicate not only with their legal counsel but also their family, friends and community. The Detention Center provides several options to inmates at the facility for communication. 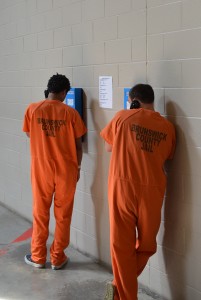 Inmates assigned to the general population cell blocks are allowed access to telephones each day. The inmate telephone system is programmed for outgoing collect calls only and are provided through Securus Technologies. The party accepting the collect call will be required to set up an account and will be billed accordingly.

All inmate telephones within the cell blocks will be turned on at 8:00 a.m. and turned off at 8:45 p.m. Telephones will also be turned off during meals, shift changes and any other time deemed necessary by the Brunswick County Detention Center in order to maintain the safety and security of the facility.

Under certain circumstances, inmates may be denied access to telephones. These circumstances include, but are not limited to, the following:

To stop an inmate from calling, please call the Securus Technologies at 1-800-844-6591 and advise them you would like your phone number blocked. You may also choose not to accept a call that is placed to you on a one-time-basis by selecting the appropriate selection once you hear the initial message when an inmate calls.

If you have questions regarding the inmate telephone service (telephone call charges) or you are experience problems receiving calls from the Detention Center, please call Securus Technologies at 1-800-844-6591.

The Brunswick County Detention Center offers an email service through Securus Technologies for communicating quickly and easily with inmates at our facility. Email is the fastest way to send communications to inmates, for a nominal fee. Inmate emails will be received by Detention Staff, printed and delivered in printed form to the inmate, typically within 24 hours. To start sending inmates emails or for more information about the system, click the button below.

Inmates will not have access to a computer system to reply to emails, outgoing correspondence will continue by U.S. Postal Mail. Email messages may not contain any pictures or other attachments and soliciting any business through the email system is strictly prohibited. Any emails received for inmates who are no longer in custody will not be delivered.

Inmates may use the U.S. Postal Service to send and receive correspondence. Writing materials, cards and stamps are available to inmates through the Commissary Service. Paper, stamps, envelopes and postcards cannot be mailed to inmates for use in their correspondence. Indigent inmates are provided writing materials and envelopes to mail two personal letters per week.

Inmate mail is distributed Monday through Friday within 24 hours of being received from the U.S. Post Office, except during weekends and holidays.

Incoming mail must have the full name and address of the sender clearly written on the outside of the envelope. All correspondence must be written in ink and not pencil.  Incoming mail must be addressed to the full name of the inmate (the name and spelling under which they were booked in). Any mail not meeting these requirements will not be accept. To expedite delivery to the inmate, all inmate mail sent to the Brunswick County Detention Center should be addressed as in the following example:

All correspondence, with the exception of legal mail, will be opened and scanned into a .pdf format and distributed electronically. Legal mail is correspondence or legal materials coming from an attorney and must be clearly marked “Attorney/Client Mail” or “Legal Mail”. Any legal mail received will be opened and inspected in the presence of the inmate. No inmate-to-inmate mail is allowed either directly or by a third party without prior approval by the Jail Administrator.

When sending letters or cards to an inmate at the Brunswick County Detention Center, certain rules and guidelines apply to ensure the safety and security of the inmates and the facility.

Incoming mail containing photographs is strictly monitored. Inmates are only authorized to possess up to two (2) photographs printed on regular copy paper at any time. Photographs exceeding this amount are inventoried, documented and stored in the inmate’s property for return upon the inmate’s release.

Any mail received not meeting all of the guidelines listed above, or that contain prohibited items, will be returned in it’s entirety to the sender. If any illegal substances are found, the correspondence will be turned over to the Brunswick County Sheriff’s Office for further investigation which may result in criminal prosecution.