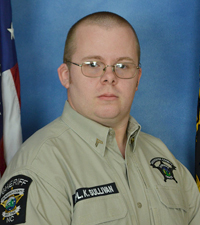 The goal of the Detention Center Inmate Programs is to provide inmates the chance to address those issues that may have contributed to their criminal behavior and incarceration. While incarcerated, eligible inmates have the opportunity to participate in various programs.

The Detention Center’s inmate programs are intended to reduce idleness, encourage productivity, and promote a sense of accomplishment. All programs are offered to both male and female inmates.

The Alcoholics Anonymous (AA) classes allow inmates to share their experience, strength and hope with each other that they may solve their common problem, which is the desire to stop drinking. The primary purpose is to teach individuals to stay sober and help other alcoholics achieve sobriety.

Narcotics Anonymous (NA) classes focus on the twelve steps and twelve traditions of NA; including admitting there is a problem, seeking help, engaging in thorough examination, confidential self-disclosure, making amends for harm done and helping other drug addicts who want to recover.

Religious services are held on various nights to encourage and help the inmates cope with difficulties they are facing while incarcerated. Religious services help the inmates cope with their past mistakes and also with the struggles that they may face while here and in the future. Ministers within the community are encouraged to visit those that they know are incarcerated in the Brunswick County Detention Center. The Chaplain is available upon request.

General Educational Development (G.E.D.) classes are offered to inmates who have not yet earned their high school diploma. These classes prepare inmates to take the G.E.D. test. Classes provide valuable educational information regarding all of the five main topic areas: math, language arts (reading), language arts (writing), social studies and science. All participants must first take an assessment test to inform the G.E.D. instructors of the areas inmates need to focus on in order to pass the G.E.D. test.

The Inmate Road Crew was formed in November 2006. It was created to collect litter on State and Local Government maintained property. The Road Crew consists of two deputies and a maximum of twelve inmates. The work schedule is five days per week if weather permits.

In 2010, inmates surpassed 1,000,000 pounds collected. The program is a tremendous success and a great value to the citizens of Brunswick County.